All Collections
Custom Integrations
What is a Trigger?

What is a Trigger?

A Trigger is basically an event which a recipe will be "listening out" for. Learn more in this article.

Written by Drew Wilkinson
Updated over a week ago

📌 Note: This article refers to our Custom Integrations which are available to users on plans over $145/mo.

What is a Trigger?

Some triggers, such as the one shown below, requires you to select the specific object that you are looking to watch for. Some triggers also have additional parameters to specify how far back it will go to look for the events. This is known as the From/Since Parameter and will be talked about in the next article.

In the example below the recipe is looking for a 'New Object' in Salesforce. I have also set the object to "account", and the From parameter to "an hour ago". This means that this recipe will be triggered for each Account that has been created in Salesforce in the past hour, as well as every account that was created from the time the recipe was started. 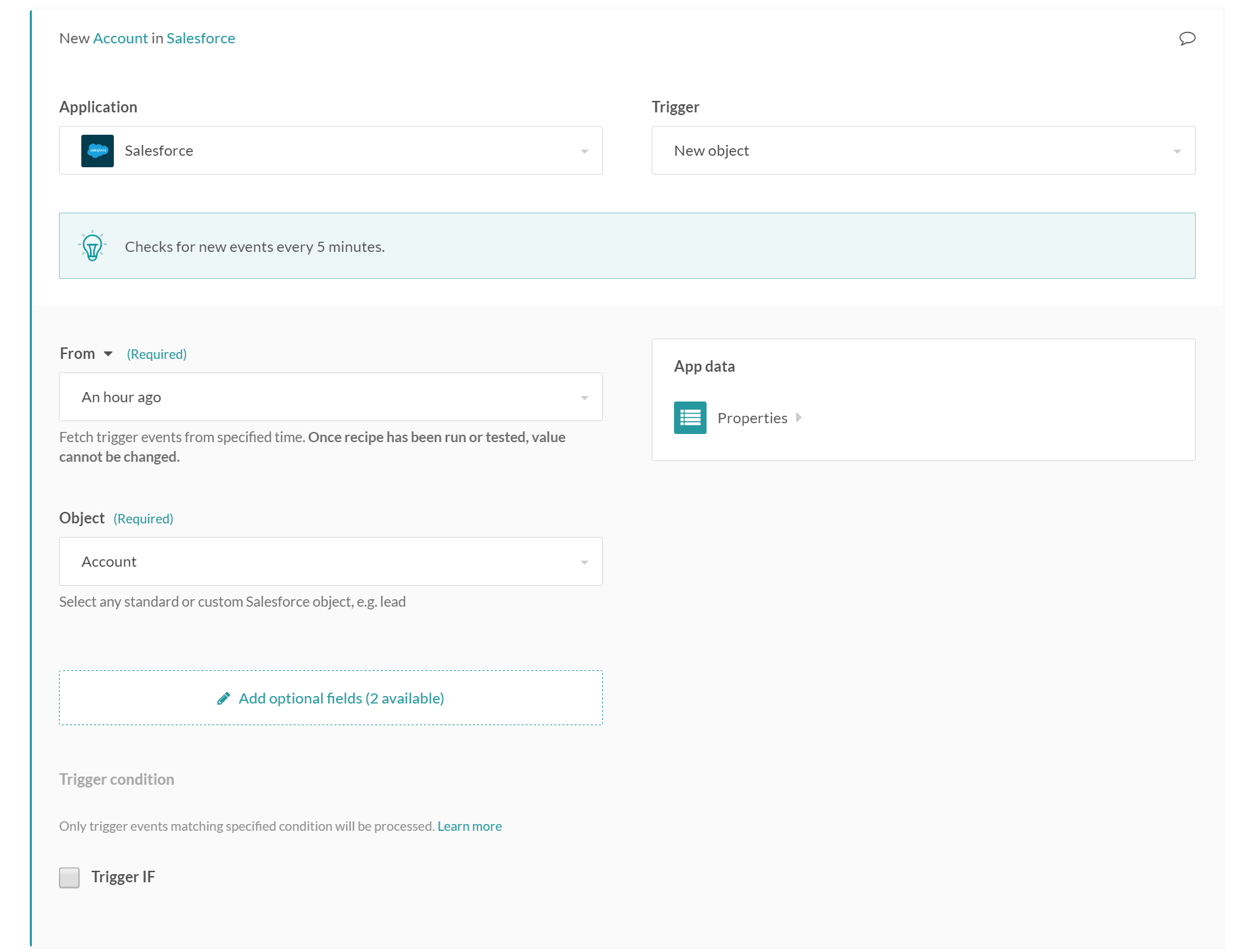 What happens after a job is picked up?

After a job is picked up, the data associated with a particular job will be available in your "Trigger output" for use by your actions. For example, if you are triggering off "New Opportunities" in Salesforce, when a new opportunity is created and triggers the recipe, the "Trigger Output" will contain the data from that particular opportunity such as the Opportunity Name, its created date, the associated Account ID and so on. This data can then be moved to other fields in your other applications through recipe actions using a process known as "field mapping". But more on that later.

How often does my recipe trigger?

This depends on the type of trigger you have set up. There are currently 3 main types of triggers. Polling, Real-time and Scheduler.

Polling basically means that the recipe will go into your app to look for jobs at set intervals (polling cycle), which is 30 minutes for the Community plan, 10 minutes for the Base plan and 5 minutes for Professional and above plans. Polling will pick up all the jobs that occurred since the last poll unless you are running through a large database at the first run, in which case it may take slightly longer to pick up all jobs. Polling is the default method for triggers.

Real-time means that the recipe will pick up jobs as soon as they occur. some configuration may need to be done on your app in order to use it. Instructions will usually be found in when setting up Real-time triggers if applicable. These are denoted with the

symbol when selecting the trigger.

Using the Scheduler Trigger app allows you to select a fixed time (in intervals of your polling cycle) to trigger your recipe. This means you can set your recipe to trigger every hour, every weekday etc.

Did this answer your question?